To continue the story….

Our Perugian friends, as I said (over a month ago. Yikes) were getting on in years. And Kathy’s got a real estate obsession—she looks at house floor plans for fun—and she started to browse Italian real estate sites. At the same time, a friend of mine who’s an accountant and a business consultant who works with Euro-people, told me if I wanted to buy something, now (we’re talking late 2005/early 2006) was the time. 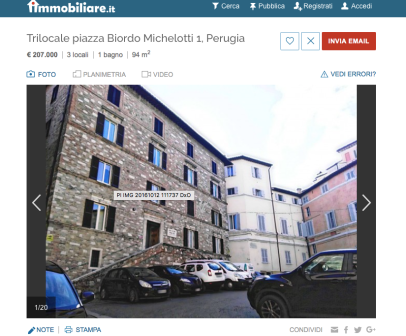 The quest took a few months. Kathy “saw” dozens, if not hundreds of apartments. I had to winnow them down; I was assigned reconnaissance duty at the end of the online quest. To tell you the truth, I had no idea whether this was going to work at all. So I arranged via email to meet with a few real estate agents, leaving my Italian mother Giovanna’s number. Giovanna took her assisting duties very seriously, acting as my scheduler and go-between.

And off I went, with a limited budget. I saw apartments that appeared to be converted storefronts. In one place, in a fairly modern building, the current occupant was clearly not having it. The place was an absolute mess of dirty dishes, crap all over the place, and the woman who lived there chain smoking and muttering under her breath. I saw one place that was owned by an interesting, “artistic” (the agent’s word) woman. Bright colors, strange fixtures—fish shaped sconces, anyone?—and with a bonus cantina in the basement. But that one was on the outskirts, on one of the main roads heading out of town.

Then I visited a cave. Or something that looked like one. It was in an old building that had been partly occupied by squatters. The city moved in, evicted the squatters and sold the spaces to a builder, who divided up the space into a few apartments. 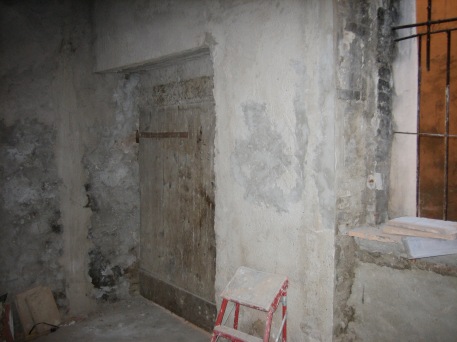 The unit I saw was in an early phase of renovation, and the walls were scraped down to the stone. It did, indeed, look like a cave. Cables and pipes ran through conduits in the floor, and cinder blocks demarcated some new spaces. There was a partly deconstructed fireplace, and what looked like a big hole in the bedroom wall. A medieval door, studded with nails, opened to the alleyway. There were no windows. It looked a wreck.

I fell in love immediately.

I guess I have a vivid imagination, and I could picture myself living there, in a finished little jewel of an apartment. It was a good space, in the neighborhood I wanted to live in, right around the corner from our friends. Students and student hangouts gave the place a hip vibe. And the zone was starting to gentrify.

I called Kathy right away, told her I found The One. I arranged to see it again, after looking at some other places that didn’t measure up, and asked my big brother Antonio to come with me the second time around. I trust him in all matters. He’s a combination big brother, friend, fixer…more about him later.

We went back. He asked questions of the real estate agents. He talked to the workmen buzzing around doing stuff. He told me “buy it.” We did. I won’t go into the specifics of buying real estate in Italy. If you’re really interested, go here.

So, why “training wheels”? Well, I’d been to Italy a lot, but most of the time I stayed at the homes of relatives and friends. I rarely shopped for food, did laundry, got utilities connected, got a mobile phone, bought Internet service—in short all of the things you need to live in a place. And I got quite an education. I’ll describe what we did with the apartment and our lives there in later posts. But looking back, the past decade was just training for what might be the real thing, year-round living in Umbria, in a house in the country no less.

Next up: 10 years, summers and whenever we could get away