I signed up on Quora.com awhile ago. I was intrigued by the mixture of questions, from genuinely wanting to know something, to clueless, to trolling. So I thought hmm, maybe I’ll use that format here. In the absence of real questions (feel free to ask me some via email), I’ll make up some of my own.

What the hell do you do up in the country?

I had no idea watching the color of the hills change by the hour, sometimes by the minute, could take up so much of my time. And in an unaltered state of consciousness, no less.

Seriously, what do you do?

We serve Retu. It is our job to feed him, praise him, get him to sit, teach him other languages, and did I mention feed him?

Whose dog is he?

Retu belongs to Ca’ Mazzetto, our neighboring agriturismo. Supposedly. But I’m getting the feeling that the dogs along our road don’t belong to anyone. Or, they belong to everyone. I’m trying to figure that one out.

What is an agriturismo?

Are you trying to confuse me by changing the subject? Well, ok. An agriturismo is a working farm that takes in paying guests. Ca’ Mazzetto has a few apartments, a pool, about 125 sheep and a bunch of olive trees. They produce cheese, fabrics (wool, of course) and olive oil. I may be missing something, and, hey, Joonas, did I? (Joonas is the son of the proprietor and sits on our town council, too.)

What kind of dog is Retu?

He’s a relatively rare breed that is native to these parts, called a Maremmano. According to Wikipedia, the Maremmano is “a breed of livestock guardian dog indigenous to central Italy, particularly to Abruzzo and the Maremma region of Tuscany and Lazio.” The breed is known to be intelligent, loyal, protective, and friendly. He definitely was smart enough to find a sucker in The Spartan Woman, who actually buys dog food for him and, this evening, fed him tagliatelle with truffles.

How is that breed used?

Again, from Wikipedia: “Maremma used as livestock guardian dogs are introduced to sheep flocks as puppies so they bond to the sheep. Some ranchers place Maremma puppies as young as 3–4 weeks old with young lambs, but beginning this bonding process at 7–8 weeks is more typical.[19] Although it is easiest to bond Maremma to sheep and goats, cattle ranchers have found that the dogs bond with cows and Maremma are increasingly used to protect range cattle.” 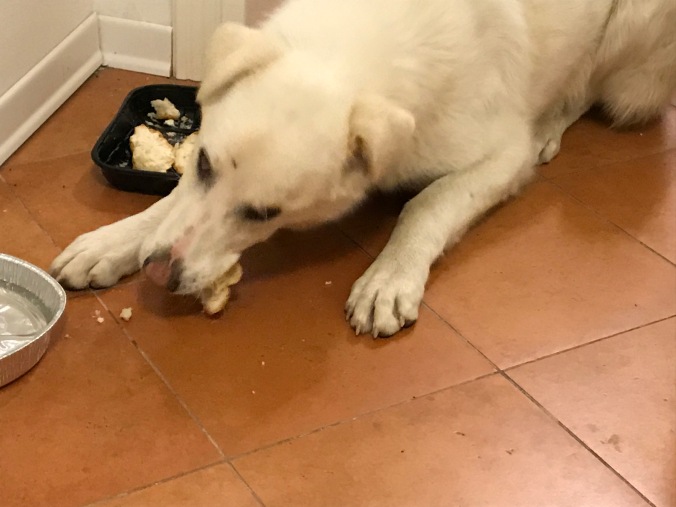 Does Retu live up to his breed’s reputation?

He’s a splendid young dog. But if he has bonded to the 125 sheep that live next door, it remains to be seen. One of his owners said that Retu has decided to take early retirement. Whatever sheep guardian attributes he may lack, Retu is definitely good at bonding with humans and bending them to his will.