We’ve become terribly lazy and when it’s hot, we don’t get out. Better to ride out the heat up here on the hill. But the other day we had errands to do, people to see. And one of them was my barber, Franco. So we headed into the big city around here, Perugia, population about 170,000. It’s the provincial and regional capital, and despite its small size, it boasts a couple of universities, some world-class festivals (Umbria Jazz, Eurochocolate, and the Journalism Festival), and even a short metro line.

Franco’s shop is down the street from our little place in Perugia’s university quarter, and his clientele is a mix of students, old guys in the ‘hood, and city officials. He’s an artist, too and carves elaborate canes and displays them in front of the shop. The shop is festooned with photos of Perugia’s historic center, and it seems as though he’s the unofficial mayor of the quartiere.

This time, as he sheared my hair off (“I’ll give you a summer cut”), we talked about the city. Everyone likes to say that it’s not the same any more, that the city you knew is gone. In a real sense, Perugia really isn’t what it was. Oh, it looks the same—the Fontana Maggiore looks majestic and spiffy, especially since they cleaned the façades surrounding it of years of car and bus grime. The main drag, the Corso Vannucci, is still the center of downtown, and people walk up and down, shop, and stop at the many bars and restaurants that put their tables out in warmer weather.

But if you look closely, you’ll see that very few of the storefronts contain shops that people use every day. There’s a Footlocker, a pretty big Benneton, a large bookstore, and lots of boutiques. Off on one alley is a cannabis shop—weak weed is legal here, and I’m told that you can barely catch a buzz from it—and there are some bakeries and a couple of small food shops. Up on the “acropolis,” though—it’s the highest part of the city— there are no barbers, dry cleaners, hardware stores, etc. It’s better than the mass tourism crap that afflicts Florence, but you can see that the center of Perugia is becoming a combination shopping mall/bar district.

The numbers bear that out. The historic center’s population is around 10,000, a shade over 6 percent of the overall total. More telling, though, is that over half of those are single-person families, mostly students and the elderly.

There are a bunch of reasons for this. Chalk it up to the usual trends of modern Western capitalism. Downtown apartments tend to be smaller and have fewer conveniences, so a lot of people have moved out toward the edge of the city, into modern apartments and house. Students can afford the rents downtown for the smaller places, and they don’t all need cars to get around—the historic center is mostly a pedestrian zone, which works really well for a college kid wandering from class to home to bar and bar and bar and …. They’ve built large shopping centers and movie multiplexes on the outskirts, and the old covered market, once a thriving place full of farmers, butchers and fishermen, was closed for renovation a few years ago. After years of polemics, a compromise was reached, with half the market going to local “normal” growers, and the other half reserved for the luxurious food experiences beloved by tourists and the city elite. (It’s still under construction and doesn’t look like it will open any time soon.) 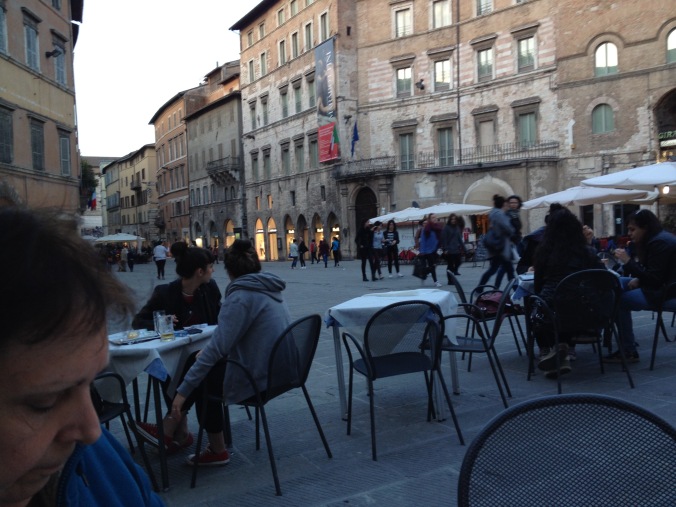 The Corso on a spring evening

But some of the blame for the center’s mutation has to be laid on decisions made by the city government. In trying to rid the center of the traffic that once clogged the narrow lanes, the city made most of the downtown a ZTL: zona di traffico limitato, or limited traffic zone. That made getting in and out of the city for the center’s residents hard. They either have to get permits, or park in the parking lots down the hill and struggle up escalators (yes, escalators) with their packages. If you need something delivered, the store needs to get a special permit.

One decision was just boneheaded. Seeing the situation above, the government invested about €100 million in the Minimetrò, a short metro line that works like an airport people mover. It’s run by cable and as such can negotiate the steep hills up and into the center. In fact, when it reaches downtown, it goes into a tunnel and to exit, you either take a nifty incline elevator or three, count ’em three, escalators. They work most of the time. The stations and the line in general were designed by the French architect Jean Nouvel. It’s pretty cool, except for one thing. One big thing: It stops running at 9:20. At 21:20. Yeah, just after 9 in the evening. 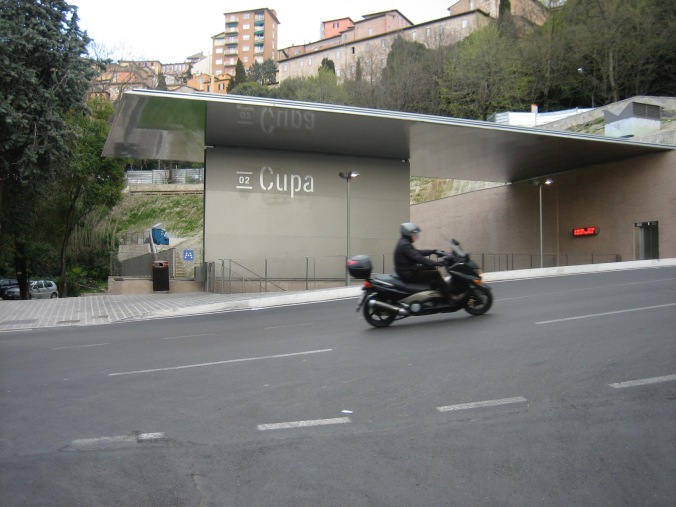 This is beyond dumb. Apparently some families who live along the line objected to the hum that the Minimetrò makes. Trust me, it’s less annoying than a passing bus or a bunch of Vespas. Okay, during festival time it runs later, so people can get to their cars down in the big free parking lot. But this is a fact: Italians don’t go out for dinner until past 8 pm (or 20:00 euro time). And they’re usually not done until, well, way past 9:20. It’s absurd, and cripples what should have been a crowning achievement. When the cooler weather comes, Perugia’s main drag is often deserted, the once-vibrant center a ghost town.

Perugia isn’t the only city so afflicted. A lot of historic European towns have had trouble finding that balance between making things safe for pedestrians and historic structures, while keeping the centers viable. I hope Perugia finds a way to do it; I’d hate for it to become just another charming place to have a drink on a summer evening.