Between these three guys you can count maybe six passports.

I’ve been bad about blogging lately, but I have a good excuse. We’ve had a parade of houseguests. They’re weren’t high maintenance or anything like that; in fact it was a lot of fun to hang out with them. Because of that, I took a break from writing.

First off (the American) was Doug. He’s a comrade from way back. In another life, he was the art director of a weekly publication we both worked at. (It’s now owned by a company that must not be named, so you’ll have to figure it out.) Doug exercised almost dictatorial powers over story length and the appearance of the text. We editors tried to cheat by putting in squeeze commands in the ancient Atex system that we used (cw-x, where x MUST NOT UNDER ANY CIRCUMSTANCE BE >3). Eagle eye Doug, of course, noticed if we went over 3.

Despite being bossed around by that then- long-haired art director, of all people, I managed to become friends with Doug. We soon became part of a group of people who had what became legendary lunches on Friday at Florent, a pioneering restaurant in New York’s meatpacking district. A bunch of us from those days are still friends—newsroom friends have been through something akin to bootcamp and group therapy and stay friends. And Doug’s been jonesing to come visit us up here on the hill. So he came to visit, and spent a lot of time hiking the hills, helping out with dinner, and sighing a lot because it can get ridiculously scenic ’round these parts.

Doug, Kristina, and Martina puzzle out what to have for dinner.

I’m not sure the next pair qualify as guests—well, one did, a friend of the other sort-of guest, who was none other than Martina Maria Scozzare Paonita, daughter no. 1. Martina came for poolside therapy, good food and wine, and to hang around the parental units, who’ve been bad mommy and daddy and left their children for a few months. Martina’s an official Eye-talian, thus satisfying the middle criterion in the headline. We all went off one night to the taverna in town, part of a week-long celebration of itself that our comune holds as summer ends. For the uninitiated, a taverna in this context is usually an outdoor, town-hosted restaurant. You get an order form, find a table, fill out the form and take it to the cashiers. You pay, and sometime later, runners bring your order. In Valfabbrica, where we live, the runners are kids dressed in medieval garb, to go with the general theme of the week.

This year’s poster for Valfabbrica’s Palio celebration. Literally, “all the medieval that you have inside,” but I prefer to translate it as “get your inner medieval on.”

Romanians? Well, we had a few. And once again, like the women of July who came to stay, there’s a dog connection: Matei. Matei may not realize it, but he’s slowly making his way around the globe: from Bucharest to New York to Milwaukee, where he currently lives with the great Shana and the too-adorable Natalie. (The last one is only 2 years old, and I’d post a picture but I don’t post pix of other people’s kids without permission.) What’s next? Seattle? Vancouver? Sydney? Mumbai?

With Matei came other Romanians, his cousin Irina and her husband Stefan and kid Noa. Irina and co. live in Milano, but came to Italy from Montréal and originally hail from Romania and Israel. All of this means that at the dinner table, we had plenty of languages to choose from, which can be fun or nerve-wracking, depending on your disposition. It usually worked out like this: English as the main language, with breakout groups in Italian and Romanian, and the occasional French phrase.

They’re all gone now, and it seems really quiet and lonely. Everyone’s back to their routine, and we’re already thinking of next summer. 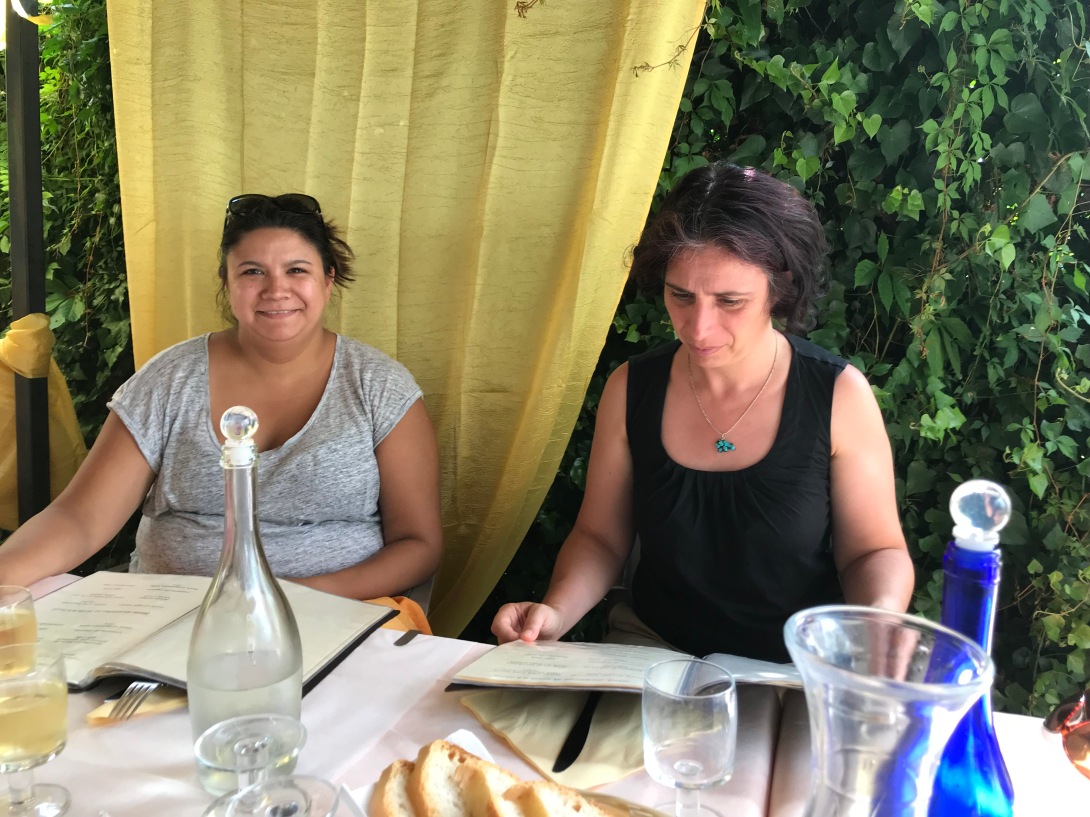