Three weeks back in the U.S. and we already wanted to escape. The political circus here was too much, but by living in Italy part-time, we were missing some of our favorite places in North America. One of them is Montréal, a straight drive up I-87 from New York. One of our kids lived there for a while, going to university, and we missed the French-accented vibe, the combination of North American laid-back attitude coupled with Latin hedonism.

So we pointed the VW north. With Liv and Al, plus Lola the dachshund in tow, we joined Martina and her boyfriend Dan for a family long weekend.

I’d forgotten how different the city is from New York—it’s like, in a different country. Beyond the obvious—the street signs in French, the metric measurements—it feels a lot like Europe these days, and less like the U.S. For one thing, at least in Montréal, the cars on the streets are smaller. You don’t see many hulking pickups, or huge monster SUVs (Escalades, the big BMWs and Mercedes, etc.) VW Golfs and Mazda3s are more typical. And there are bikes everywhere—New Yorkers like their two-wheeled transport, but the Montréalers have them beat. There are clusters of bikes everywhere, in front of every dwelling, scattered around in front yards. A lot of streets have dedicated lanes, and Montréalers ride in the worst weather, too. 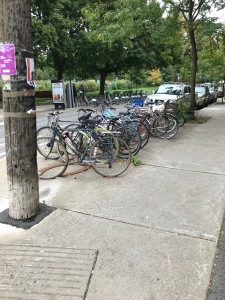 Montréal wasn’t immune to political tumult. Earlier this month, the Coalition Avenir Québec (Coalition for Québec’s Future) won a majority in provincial elections. Variously described as center-right, populist, or anti-immigrant, Montréalers gathered while we were there to protect what they see as the CAQ’s racist stance.

But we were there to escape, and we did for a bit. For one thing, we got to know Child No. 1’s boyfriend better over a couple of dinners, and that was good. Dan, you passed. Speaking of dinners, we first gathered at Restaurant Alep, a cool and elegant Syrian restaurant near the sprawling Marché Jean-Talon. Amazing, refined takes on the usual dips along with some really interesting dishes. With so much to choose from, we put ourselves in the hands of our server. She just brought food out that she thought we’d like. And she was right. 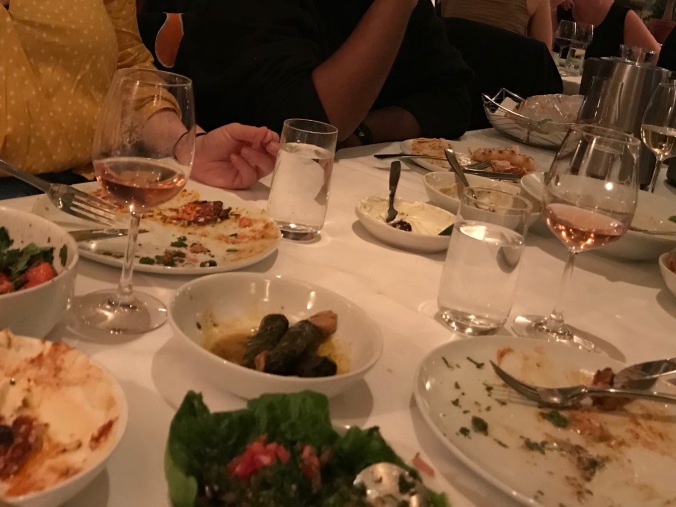 We came, we ate, we demolished

The next day, after the obligatory cappuccino and croissant—okay, a pain au chocolat—we walked around the old port doing some shopping and then it was time for culture. Having an architect in the family meant that we had to visit the CCA—a museum and foundation whose acronym works in both French (Centre Canadien de l’Architecture) and English (Canadian Centre of Architecture).

There’s always something interesting going on there, and so it was that day. Unfortunately for you guys, it was the last day of an exhibit on revolutionary Italian architects of the 1960s and ’70s. A couple of them eventually became famous, like Ettore Sotsass, a leader of the whimsical “Memphis” movement. You can see his influence in a lot of the furniture sold today, even in places like Ikea.

Naturally, a lot of it was unintentionally hilarious. There was one grainy video manifesto, full of Big Statements about contextual dichotomies and stereotomic liminal tectonics, in Italian no less. That took the voiceover to another level. There were dinner tables set with plates representing different constituencies and capitalist considerations, and models of cars going through apartment buildings. Anyone wanna deconstruct that?

This needs no deconstruction. It was, for whatever reason, a comment on modern Italian TV culture:

The trip was way too short, and made me just want to go back up and spend a few more days. I’d love to stay at Hotel10 again—for some reason, we reserved a normal room and ended up in a palatial suite, with a huge living room, a couple of bathrooms equipped with every toiletry you’d ever need, plus comfy bathrobes, all of it in a cool industrial style package, complete with polished concrete ceilings. (Yes, we noticed the ceilings.) It was the kind of place you’d imagine a band hanging out in, calling out for bottle service and some, um, company. 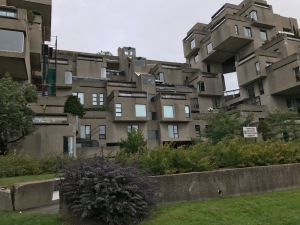 We ended our stay with a visit to Habitat 67.  The apartment complex was conceived as architect Moshe Safdie’s thesis project at McGill, and was built for Expo 67. We’d never been, and the place is pretty amazing, if isolated from the urban fabric. There’s always a surprise in Montréal, though, and this was pretty cool. Despite all the “propriété privée” signs, a friendly groundskeeper pointed us to a trail behind the complex, on a slight bluff above the St. Lawrence. It’s a hot surf spot, and despite the drizzly, chilly day, intrepid Montréaler surfer dudes and dudettes were taking to the rapids. Très cool—literally. 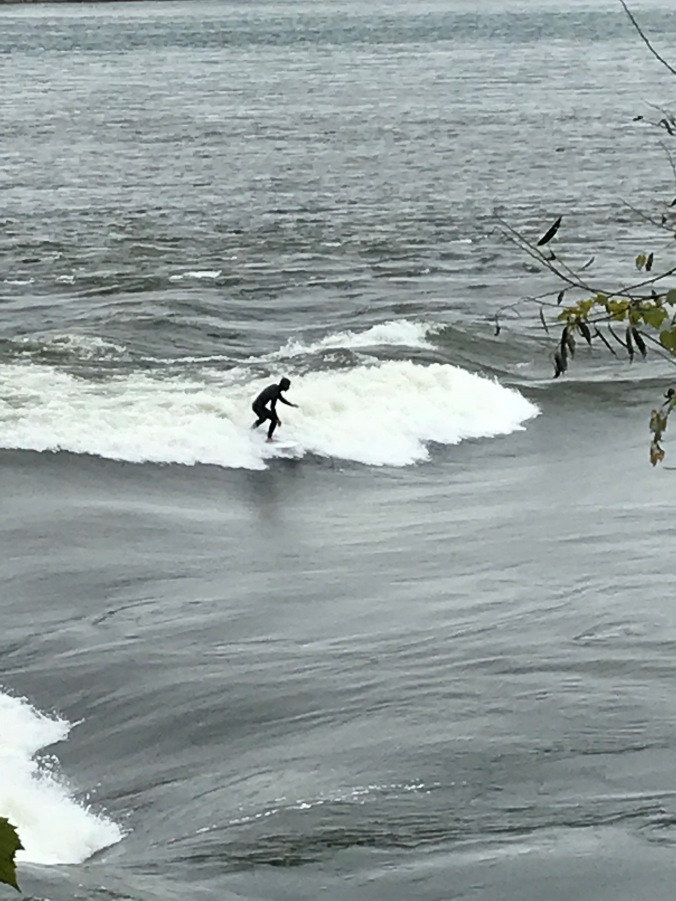 One thought on “Nord of the Border”