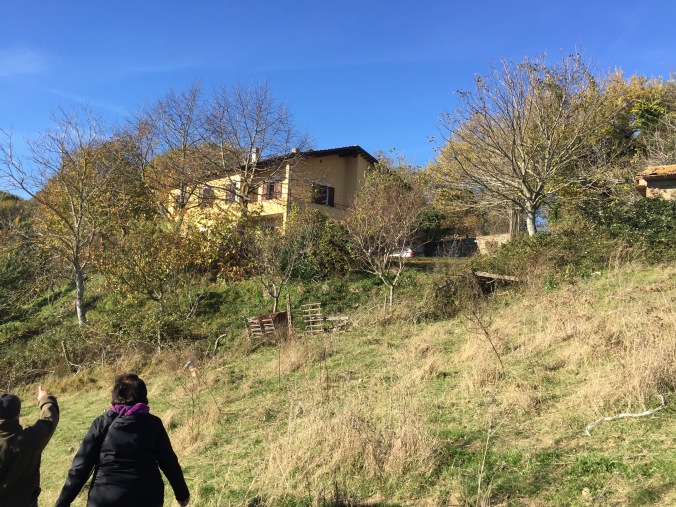 A couple of summers ago, our younger daughter came with us to Perugia and took a friend along. Another friend joined them there. We have one bedroom, a living room, and a kitchen. You do the math. If you want it expressed like kids are supposed to do these days with math sentences, it could look something like this: Apartment+3 guests=no living room.

The city apartment is fine if it’s just the two of us. When we’re feeling claustrophobic, we take a walk. Perugia has tons of places to hang out, especially when the weather’s nice. For a few euros, you get a table and a drink for as long as you want it. But I’ve been there when the rain is relentless, and I got a little antsy. It doesn’t help that the apartment looks out on an alley way and a neighbor’s patio. On one trip, the Internet was not cooperating, and I hate TV. Drinking my way through the week didn’t appeal, so to relieve the boredom I went out in the rain and bought a cheap but decent guitar.

So when The Spartan Woman started looking at real estate ads for a place in the country, I didn’t immediately go to my default “you’re nuts” reaction. (She has a thing for real estate, possibly a hangover from when she and her sister and parents lived in a four-room apartment. “Very large rooms,” she’s shouting to me from the next room, but I think the experience led to this obsession.)

What helped was an unfortunate thing, a bad economy. Italy’s been suffering from economic stagnation for years. The regime of Silvio Berlusconi (a successful businessman! He loves Putin! Has to be surrounded by women much younger than himself! Sound familiar? Thankfully, it ended a few years ago) didn’t help; the guy basically wanted to be in office to shield himself from prosecution. So real estate prices in Italy have crashed, and houses stay on the market for months.

We did a reality check, and floated the idea of buying a country place at dinner with friends. No one thought we were insane; Laura said it was a good idea since there were lots of good bargains on the market.

I didn’t reckon on The Spartan Woman’s determination and speed. I thought she meant sometime in the future. But a few months of research and a whirlwind tour of some properties and we were making an offer on a house perched on a mountain above the town of Valfabbrica, about a half hour outside of Perugia. A few months later, paperwork and financials done, we’re the owners.

I’ll go into more detail later, but the house is big enough for guests. We have lots of outdoor space, and it’s right near the Sentiero Francescano, a set of hiking trails that follow the Assisi-to-Gubbio walk of the Umbrian saint.

We’re heading there soon. I’ll post more about the Valfabbrica house and our plans; we’re pretty much caught up now. We still have the apartment, and we aren’t planning on getting rid of it (those low prices make it a stupid thing to do). So we’ll have a city/country life, but in Italian, at some point.