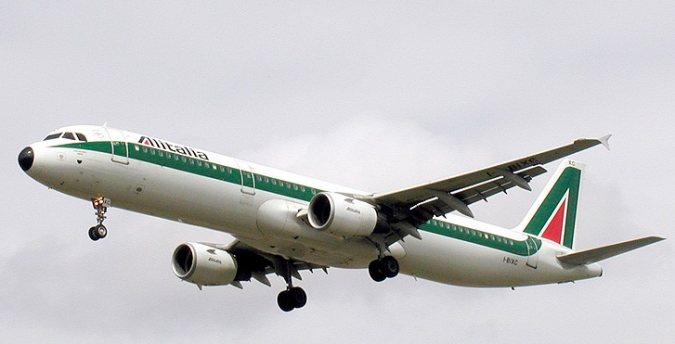 My first flight was on July 4, 1971, to Rome on Alitalia. It was on a new Boeing 747. I was headed to Italy with my family, and it was my father’s first trip back to the land of his birth since he left in 1955. It was the summer between my freshman and sophomore years at Brooklyn Tech.

Back then, flying was exciting and even fun.In coach, they gave us slippers and eyeshades, and dinner centered on a filet mignon with some sort of wine-mushroom sauce. It was all served on real china with real silverware. I’m sure my parents had drinks and wine. When my sister and I got up to wander around the plane, I saw the spiral staircase leading up to the first-class lounge. “Maria, come here,” I said. “No, go there,” said a flight attendant, pointing back toward the coach seats.

I took a lot of Alitalia flights over the years. The meals got less elaborate, the seats got more cramped. The drinks got less lavish, but there was always wine and beer.

I’ve been thinking of Alitalia, because in a way, it symbolizes what’s changed in the global economy generally, and what’s gone down in the Italian economy and the country in particular. Back then, in the golden age of aviation, countries had national carriers—Air France, Alitalia, BOAC, etc. They were the pride of the country, and often were publicly owned. (The U.S. had flagship carriers like Pan Am and TWA, but they were privately owned.)

These national carriers were, over the years, privatized. Why? A combination of European Community (now European Union) rules barring public ownership of companies like these, and the unwillingness of governments to support what often were companies operating with heavy losses.

Alitalia has been a real casualty of these trends. The Italian government(s) sold off chunks of the company over the decades, and it set off rounds of layoffs, strikes, cuts which led to more layoffs, strikes and cuts. Alitalia entered an alliance with Air France, and the two were close to a merger, but the French got cold feet.

If you look today at the Italian economy, you’ll see that a lot of it has been hollowed out. Big companies like the automaker Fiat don’t make nearly as many cars in Italy as they used to. Others, like Telecom Italia, the privatized phone company, have such complex ownership structures (with big shareholders based out of Italy) that you’ll have a hard time figuring who the true owners are.

But big companies aren’t, or weren’t, where Italy’s strengths lie—but that’s been problematic, too. Most of the industrial companies are small and medium-sized enterprises that are family owned. (While the strong food sector is basically owned by small producers and cooperatives, with the obvious exception of companies like Barilla. Formerly regional companies, like Buitoni are now owned by foreigners—Buitoni is now a subsidiary of the Swiss giant Nestlé.) These small companies have come under extreme pressure from, among other things, Chinese competitors that don’t have that nasty baggage of, you know, paying their employees decent wages and having them work reasonable hours.

But back to Alitalia. I’ll be boarding a flight bound for Rome in a little while. I’m hoping that I’ll get an upgrade that I bid on (it’s complicated, but you can’t upgrade using points for certain flights, but you can place a bet). I’d love to avoid flying coach again. Until a few years ago, Alitalia’s Boeing 777s had decent seats but the new Airbuses appear to have seats made of padded cardboard.. After a stressful flight, you get to land in Rome’s Fiumicino Airport, with long waits for bags and for non-EU citizens, long passport control lines. The company, now 49 percent owned by Etihad, is basically a low-cost carrier that charges nearly as much as the prestige carriers. And its owners are getting restless. Perhaps the latest industrial plan might restore some stability to the operation. But what it won’t do is restore that old swagger and pride of a bygone era.